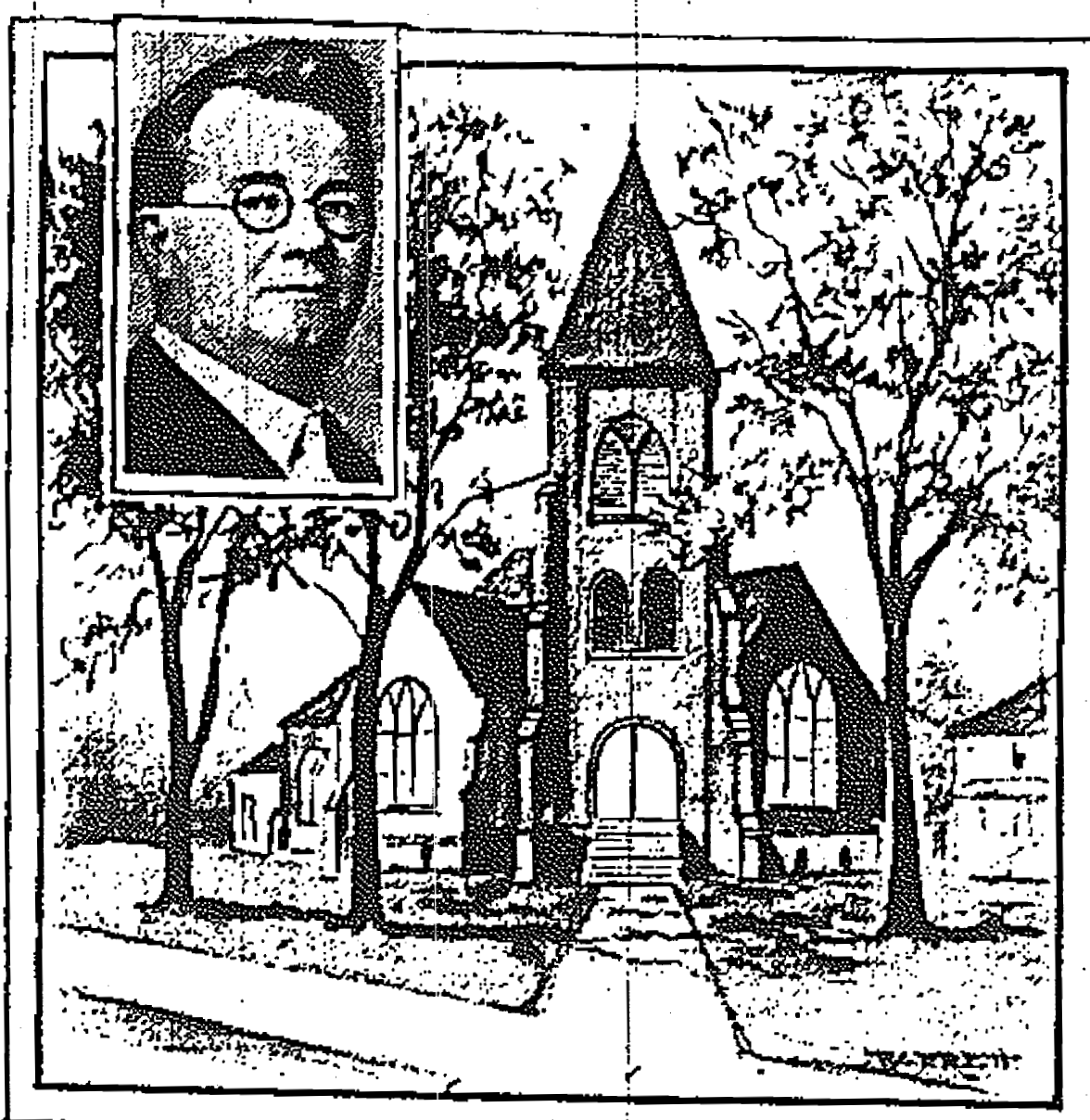 This is the 155th article of the Star-Times’ series on churches in St. Louis.

Concordia Lutheran Church of Kirkwood has virtually grown with the suburb in which it was founded sixty-one years ago. Organized with a charter membership of ten, it has today 525 communicant members. Its sixth pastor, the Rev. William Maschoff, is o in his twentieth year of service with the church.

The initiative to organize the church began with the late Peter Bopp and his three sons, Henry, Peter Jr. and Theodore. Settling in Kirkwood in 1863, this family had been members of St. Paul’s Church at Des Peres. Because of poor roads and the difficulty of travel the Bopp’s decided to take steps to start a church near their home.

Several Lutheran families resided in Kirkwood. The hamlet showed promise of future growth so the Bopps began erection of a little frame church at their own expense. Work was begun in February, 1874, and the building was finished in April. Henry and Theodore did most of the carpenter work while Peter, Jr. did the painting. This building still stands on West Madison street, just east of Kirkwood road.

On April 12, 1874, Lutherans of Kirkwood were invited to meet and organize a congregation. Twelve men responded, but only ten signed a resolution. These charter members were Peter Bopp, Sr., and his three sons, August Troegeier, Charles Betke, Henry Thalenhorst, Theodore Hegee, William Wehmeier and R. Pagenstecher.

Heege, Peter Bopp, Sr., and Tregeier werre elected the first elders and Pagenstecher was chosen secretary. Heege was elected chairman to preside at meetings and Troegeier was named the church treasurer.

The little church was dedicated May 25, 1874, with the service conducted by Revs. A. Lehmann of Des Peres and A. Schuessler of Ellisville. Later a call was extended the Rev. Mr. Schuessler, who declined, suggesting in his place Prof. Martin Guenther of Concordia Seminary.

Prof. Guenther declined a resident pastorship but agreed to come each Sunday from the seminary to perform pastoral duties for the little congregation. He guided the church for fifteen years,and won the deep affection of the members for his unselfish dedication.

In May, 1875, the congregation purchased the church building and ground on which it stood from Peter Bopp, Sr. The price was $1,000 to be paid in ten annual installments without interest. I that year a parochial school was started with a Concordia student as teacher.

In October, 1885, Concordia Church became a member of the Missouri Synod and in the following year enlarged its little chapel at a cost of $448. A few years later a lot was purchased next to the church and a building was erected which served both as parsonage and day school. Upon its completion in 1889 a call was extended the Rev. William Moll, a graduate of Concordia Seminary, as the first resident pastor.

Pastor Moll was succeeded in 1895 by the Rev. Christian Volk, who served but one year and was followed by the Rev. P. G. Heckel. Under Pastor Heckel the church began to prosper. Under his direction, in 1897, regular English evening services were begun.

After six years, Pastor Heckel was forced to give up his work in Kirkwood because of ill health. He was succeeded by the Rev. Theodore F. Walther. During his pastorate the growth of the congregation was such that the edifice had either to be enlarged or a new home built. After much discussion, it was decided in October, 1905, to purchase the present site at Taylor avenue and East Clinton place. The price was $3,500.

Plans called for a new church, parsonage and temporary school building. On May 12, 1907, the cornerstone of the present church was laid. The Rev. Theodore Meissler of Des Peres preached the dedicatory sermon September 1. The buildings, without furnishings, cost $10,950. The young people contributed $1,000 toward an organ, the school children collected money for a baptismal font and the ladies’ aid society furnished alter coverings, carpets and other things. Meanwhile, the old church was sold for $3,000.

Pastor Walther’s work in Kirkwood came to an end in 1914. On January 1, 1915, the present pastor, the rev, Mr. Maschoff, was installed. Pastor Maschoff, a graduate of Concordia Seminary, previously served in Bourbon, Mo. He is a member of the Kirkwood Circuit and the Foreign Missions Board.

Under Pastor Mischoff, German has been gradually eliminated in favor of English. Today, only about one-fifth of the congregation worship in German. In 1922 the congregation erected the present, spacious two-room school at a cost of $11,500. The school today has an enrollment of 103 and three teachers. The principal, A. F. Heinemann, is also church organist and choir master.

Concordia Church has several active groups. The Sunday school which has thirty teachers and an enrollment of 235, is in charge of J. C. Wegner, superintendent. the president of the ‘ladies’ aid is Mrs. A. Fedder. The Senior Young People’s Society is led by Paul Johnson, and the Junior society by Kenneth Heisine. The president of the parent-teachers’ association is Ferdinand G. Bopp.

Officers of the congregation are: H. Troegeier, president, A. J. Sommerfeld, secretary, and W. L. Bruer, treasurer. The president of the board of elders is J. A. Keller, and the Board of Christian Education E. A. Lorenz. The senior officer of the board of directors is T. O. Koch. The Rev. G. H. Naumann is assistant pastor.